The Mama neglects me.
As if it isn’t bad enough that she goes to hang out with the Job fellow five days a week, eight woofing hours a day, she also insists on “taking time for herself”. That selfish lady wastes precious minutes doing ridiculous things like showering, cooking foods I can’t even eat and running on the human hamster wheel. What a waste! She doesn’t have that much “spare time”. That is time could be should be spent cooking for, playing with and generally pampering ME.
One of the Mama’s favourite things to do while she is neglecting me is to cuddle up with a good book.
She reads a little bit of everything: mystery, comedy, science fiction, drama, biographies, chick lit and those ridiculous trashy romance novels with bronzed hunks on the cover. Frankly, I have absolutely no interest in any of that junk. Who cares if some Shopaholic has wracked up her credit card or if Jodi Picoult makes the Mama leaky like a rusty faucet? Not this dog. Sure, I humour the lady by snuggling up on her feet, but let’s face it, that is only because the Mama noms on some pretty good snacks while she reads! Since I can’t stand the usual drivel Mama reads, I can’t tell you how excited I was when Mama told me about the book we were snuggling up with.
It’s about Chet the Dog and his partner, Bernie and it’s written from Chet’s perspective.
Yeah! That’s right. Finally, a book that tells the story from the point of view of the smartest one in the room: the dog. Now here is a story I can get into! Plus this Chet fellow is a darn good narrator.
The Dog Who Knew Too Much: A Chet and Bernie Mystery

As the private eye team behind the Little Detective Agency, Chet the Dog and his human, Bernie’s job is to solve the mystery, catch the bad guy and save the day, but things aren’t going so hot. Totally not Chet’s fault. He’s a hot shot in the private eye world, but he’s saddled with a human that might not be quite on the ball, if you know what I mean. He’s near the ball for sure, and his heart is right place, but any human who thinks Hawaiian print pants are the next big thing is a few fries short of a Happy Meal. (Mmmmm, fries!) Lucky, just when the pocketbook situation gets rough, Bernie lands a speaking gig where Georgie Malhouf, president of the Western Private Eye Association, makes Bernie an offer that could solve all his money woes, but at what cost? 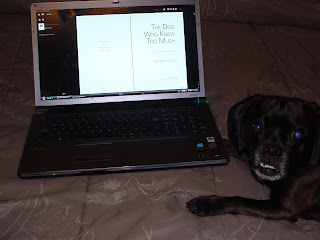 I don’t like this Georgie fellow.
When a little boy goes missing from a local wilderness camp, the boy’s mother is quick to blame her deadbeat ex, but something doesn’t quite add up and soon, Chet and Bernie are on the case. With Chet leading the way, the search takes him and Bernie on an adventure that leads them into the dangerous underworld of this small mountain town where a whole case of unsavoury characters try to force Chet & Bernie apart.
Chet is totally the star of this show.
Forget the humans, as the narrator Chet has go this story wrapped around his paw. I love a smart dog and Chet is as smart as they come. His quick wits, dog-centric commentary and dry sense of humour are what really make this story shine. Not to mention that he is the best Private Eye around and you have to respect a dog who isn’t afraid of thunder.
Chet is also quite the dog about town, blogging at chetthedog.com, making friends on Facebook and taking the Twitter by storm.
I give the Dog Who Knew Too Much 4 Paws Up, but what did the Mama think?
I’m going to hand the blog over to her, since she seems to be whining an awful lot lately that I am being a “blog hog”.
The Mama says:
I’m always a little leery of “dog books”. There are some that you can just tell aren’t written by “dog people”. They creak and groan every time they try (and fail) to capture the pure joy of a pup and you finish the story feeling like the author was trying much too hard. Then, there are dog books that are so well written and so wonderfully thought out, you could almost forget they were “dog books”, if not for the occasional “dogism” and squirrel joke.
The Dog Who Knew Too Much is one of those books that captures the canine spirit perfectly.
Spencer Quinn, has captured the relationship between Chet and Bernie so well. The story opens as Chet watches Bernie bungle a big speech and all he has to say is how proud he is of Bernie. (Must be nice! I wish I got that kind of support from my smart mouth puggle!) Chet’s character is so well developed that he leaves the role of “the dog” behind and really becomes an integral part of the story.
Some days I have trouble holding it together long enough to bring you a single blog post.
Writing as your dog can be way harder than it looks. I have huge, HUGE respect for any author who can maintain a smart and funny canine narrative long enough to write a whole book, much less four. (Kol’s Note: Seriously Mama? How hard can it be to type up my posts? I do all the hard work…all you bring to the relationship is thumbs and enough height to reach the oven.) Spencer Quinn really brings Chet to life and captures his “doggy-ness” without ever once slipping into “I Can Haz a Cheezburger” territory. He makes writing in the canine first person seem absolutely effortless and I can’t help but be totally jealous.
With  vibrant writing and a compelling mystery as the backdrop, it’s no wonder the Chet and Bernie series is on the New York Times Bestseller list.
I loved this book and I really can’t wait to read the first three books in the series.

We can’t think of a better way to spend Halloween night than snuggled on the couch with a great book, a warm dog and a hot cup of cocoa, waiting for Trick or Treaters!
Do you want to read The Dog Who Knew Too Much?
Thanks to our friends at Simon and Schuster we have three copies of The Dog Who Knew Too Much to give away! And, as if that wasn’t cool enough, they’re also throwing in a copy of one of the other Chet the Dog titles, Dog On It, Thereby Hangs a Tail or To Fetch a Thief, so that each of our winners can enjoy even more fun and mystery with Chet and Bernie!
Want to enter?
Simply leave us a comment below telling us why you want to win. You can earn extra entries for leaving a comment written from your dog’s perspective or following Chet & I via Facebook, Twitter or RSS.
Don’t forget! Every day, we’ve got a new Chet the Dog Trivia question to help earn you bonus entries!


Today’s Question: According to Spencer Quinn’s Authors Revealed page, how does he describe his life in 8 words?

And remember! You have to click “I Did It” on the Rafflecopter widget in order for your entries to be counted!

You need javascript enabled to see this giveaway.