The Mama is still off gallivanting on her “vacation”. Since she can’t be trusted to do any work, I had to take care of business and ask some of my awesome dog blogger friends to jump in and cover my tail. the Mama is a lucky lady, I tell ya! Major thanks to Jeff from SeniorPooch. Technically, our Felix is a senior dog. You would never know t. He s every bit as fun and funny and totally woofing *awesome* as a younger pup and we wouldn’t hesitate to adopt him all over again. 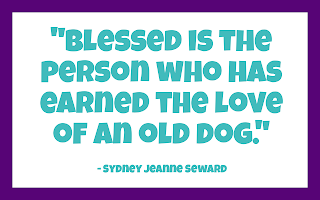 Don’t feel sorry for the 10 year old chihuahua that has run away from home and no one has come looking for him. Don’t pity the 7 year old shepherd mix off of scraps behind the grocery store for the last month. Head over to your local shelter and take advantage of the situation and do something about it for their sake.

I meet people at least once a month who remark how great it is that I adopt older dogs and yet, haven’t taken the plunge.
It’s not like they’re trying to avoid older dogs altogether based upon their interactions with me and my pooch. It’s more about the perceived insurmountable challenges that they feel they are not capable of handling. I understand this, because for most of my life I felt the same way, until I adopted my first senior canine. I did it because:
He didn’t need a lot of space or exercise – Sure, he was a nice enough dog, but the main reason I went so old (he was 9 when I adopted him), was because he seemed to be a good apartment/condo dog.
Somewhere along the line I found out a few other benefits, starting with being already potty trained. I admit, that I was told this when I adopted him, but I never took for granted that I didn’t have to follow him around waiting for him to go. The first time he had to relieve himself he went over and put his nose on the door. 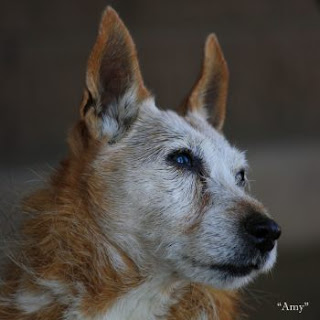 Amy, 21 years old, resident pup at Senior Pooch
Next was, his well developed personality. He was skittish, but he also already knew how to deal with people. When he was tired, he went over to his bed. When he wanted to eat, he’d head over to the kitchen and made snuffing sounds. If I watched the TV a bit too loud, he’d get up and hang out in my office. Without having to spend too much time training and setting limits, he knew how to be there for me, except for the times when he decided that it was best that he wasn’t underfoot.
The final benefit that I’ll talk about here is not one that either that old dog of mine or I had recognized at first, which was adopting an old shelter dog frees up a spot for the shelter to take in another. They may not take in another old one, but saving that one not only prevented him from being put down (older dogs are often viewed as “unadoptable” even by shelter staff), but another dog could be taken in instead of being turned away.
If you’re thinking about adopting a dog, think senior and if you still aren’t convince come on by SeniorPooch.com and check out how to take advantageof the benefits of adopting a senior dog and how to work through the challenges to make the most of your adventures with mature dogs.
Have any of the Kol’s Notes Readers have a senior pooch? We’d love to hear how they came into your life and how they make life richer!

Jeff Narucki is the Mutt-In-Charge over at SeniorPooch.com. After taking in his first senior adoptee several years ago he realized that there was not so much a stigma associated with adopting older dogs, but rather a lack of knowledge about the benefits and challenges. When he’s not blogging about his latest Senior Pooch, Rusty, or volunteering at local rescue events, you can find him enjoying all that nature has to offer in Sunny San Diego, California.