So we’ve been living in our apartment for a while now and we love it.

Koly and Fe have adjusted better than I ever could have hoped. There was a time when I would have thought that these two nutballs could never have hacked it as apartment dogs, but they’re proving me wrong every single day. That’s not to say there aren’t challenges though. 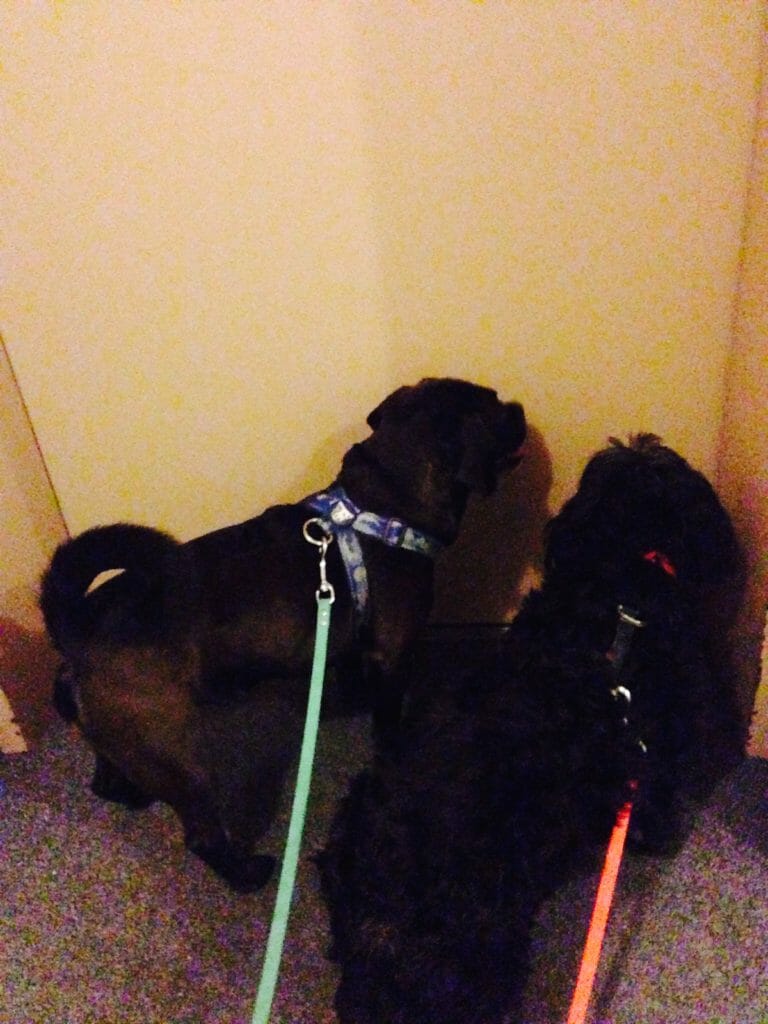 For example, after all these months, getting on and off the elevator is still an issue.

For serious, you guys. My apartment neighbours had better watch out or these two will trample them. As soon as the elevator doors open, both dogs are throwing themselves, pulling on the leash and ready to go. Most of the time, other than annoying the everliving woof out of me, it’s not a terrible problem, but sometimes, it’s really, really embarrassing.

You’ve just been grocery shopping. Your arms are full and you’re trying to juggle for your keys. You press the elevator button with your elbow. The bell dings. The door opens and WHAM! A Herd of elephants ambushes you.

Ok, ok, so Koly and Fe are just two small dogs, not an entire herd of elephants. I may have been hyperbolizing. Whatevs. My point is that it’s SUPER RUDE for my dogs to assume that they are the most important folk getting on or off the elevator every single time. I am so lucky to live in a great pet friendly building, but I’m a big believer that if we want to keep having pet friendly housing, if we want more pet friendly housing, we have to be respectful of this privilege.

I want my dogs to be ambassadors. I want to have them sit while I ask anyone on the elevator if we can join them. I want them to refrain from sniffing other people’s groceries. I want Felix, that hussy, to quit rolling over and asking everyone in the building to rub his woofing belly.

I decided it was time to do something about it. 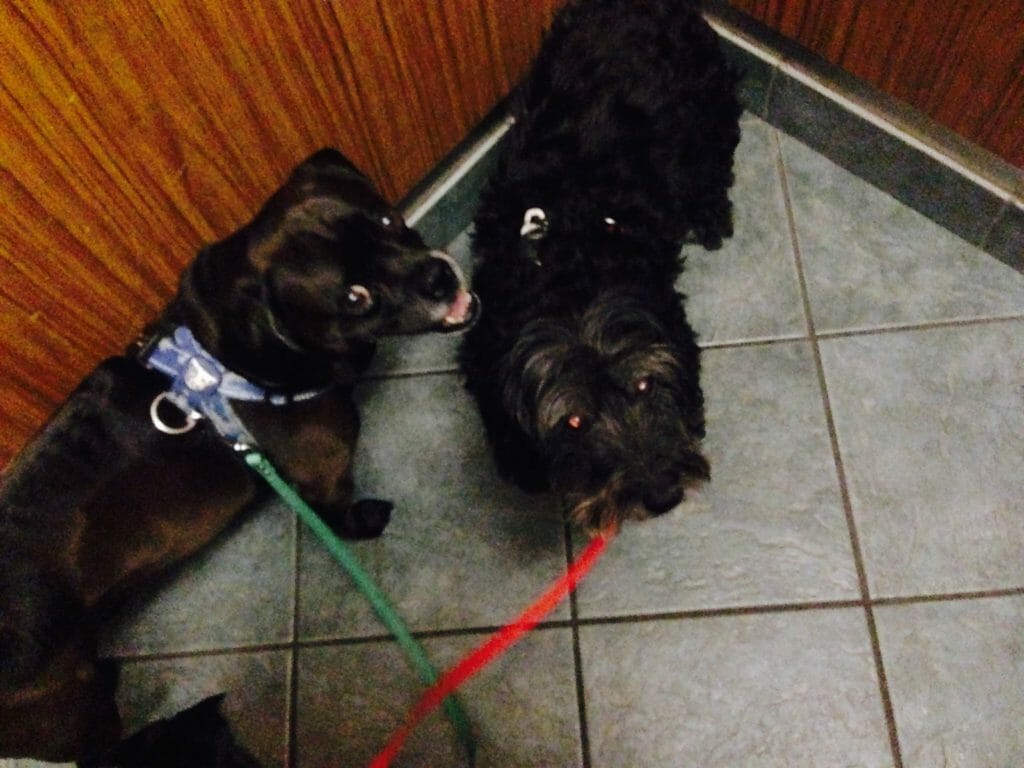 It was time to learn some elevator etiquette for dogs.

Step One:  Learning to sit nicely before entering the elevator.

I’ve decided that I want the boys to sit nicely before the elevator is even called. We’re staying a respectful distance from the door, leaving plenty of room for people to exit, if needed. While both my dogs sit on command, it’s not something we’ve widely practiced outside our home. Distractions are…challenging. We’re working on them remaining seated when they hear a noise and especially working on remaining seated when the elevator doors open. This is my everest.

Step Two: Get on the elevator without pulling.

WITHOUT PULLING, I SAID KOLCHAK. He gets so excited to go anywhere and sometimes, this can mean pulling. I would like to eliminate that. 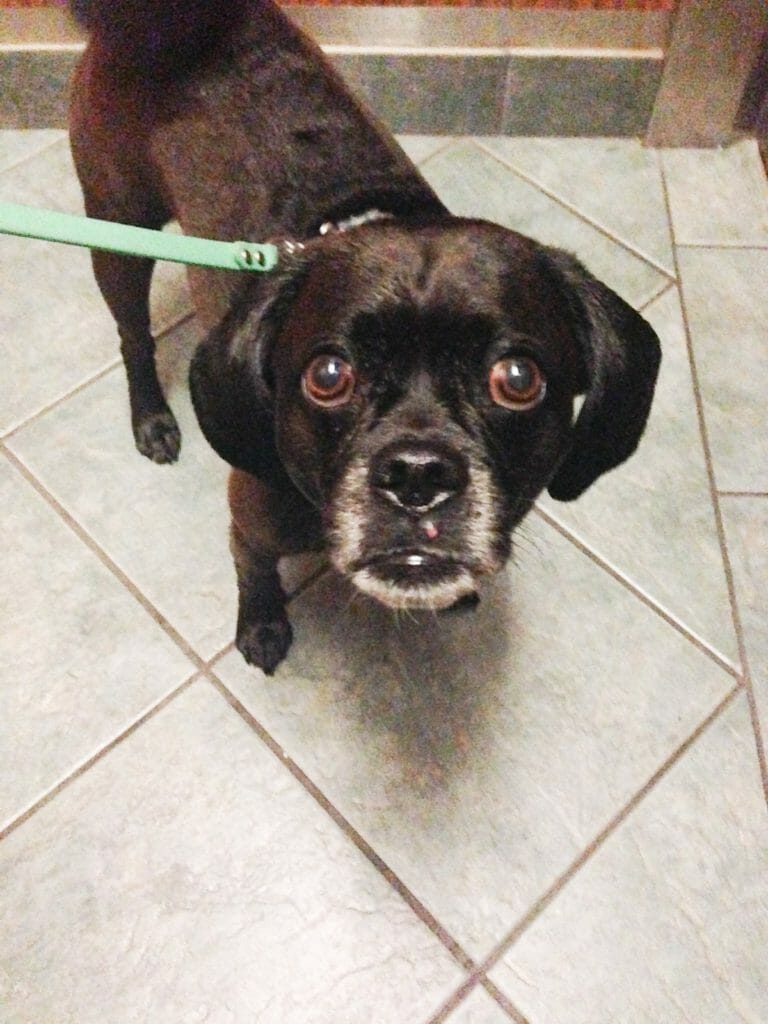 Are you saying I pull? ME?

Step Three: Step to one side and sit.

Once we’re on the elevator, I want them to move to one side and sit. Not smell every square inch of the floor. Not try to wrap my ankles in their leashes so I trip. Just sit still. I’m not asking too much…am I?

Step Five: Exit the elevator without pulling, trying not to fly at anyone waiting to get on the elevator. 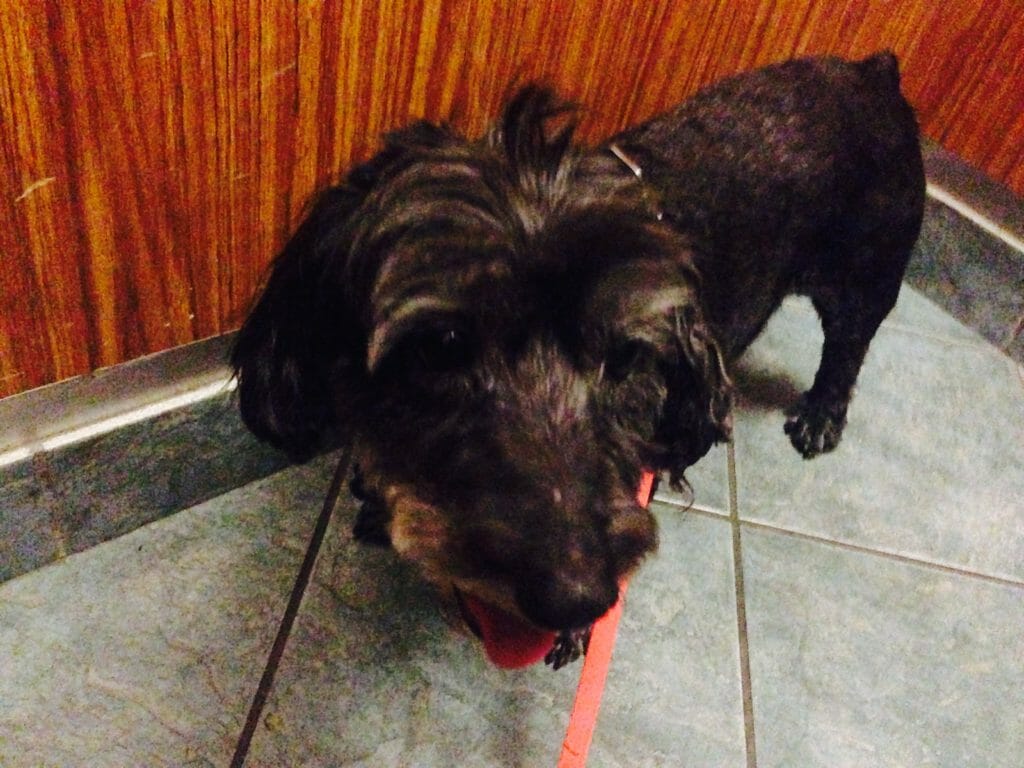 “And I think to myself…What a wonderful world”

Do you have any tips for me? Do you have an elevator pet peeve I’ve over looked? I need all the help I can get here!

I have a similar problem! My pups don't get that excited when the elevator door opens, but the people inside it get a little scared when they see me with my too huskies waiting to get in. At the first the face is always the same, utter shock. I usually ask for permission to get in, since our elevators are pretty small and I don't want my neighbor to be uncomfortable or scared. We have been told "no" several times...

It's great that the boys like elevator rides and don't find them scary. Many dogs get disconcerted by having the floor drop out from under them.

I suspect Kolchak would be less eager to ride in the elevator if you weren't always taking him somewhere fun at the end.

I bet if you rode down, turned around and came back several times in a row, he'd figure out that elevators don't always lead to adventure.

Of course your neighbors will think you're nuts.

Good luck! Sounds like some great tips. Maya has only encountered an elevator once. Pierson never has.

That is a very important topic for apartment owners and hotels, etc. Great tips.

I don't think I've ever had to take either Jack or Maggie in an elevator, so I've never really thought about it so thanks for the tips.