I don’t know what is going on, but the Mama is LAZY AS WOOF lately.

She keeps using the word busy, but we all know the truth. She’s L.A.Z.Y. pure and simple. She’s been spending a ridiculous amount of time of the human hamster wheel. (I mean really, that can’t even be FUN when you do it that often!) She’s been tappity tapping on the craptop, claiming she’s “working”. (I see that Pinterest window, Mama. You ain’t pulling one over on Koly!). Add that to the fact that she has been eating like a bird (no literally, I’m pretty sure she was eating birdseed earlier) and treats are pretty hard to come by at Casa de Kolchak.If it wasn’t for folks like Salmon Paws sending test samples, I would barely be surviving.


(Try the Omega Stix, they’re breath taking.) The point is that the Mama hasn’t been spending much time in the kitchen, but she loves Tasty Tuesday and she loves all of you, so she was determined to get our recipe done!Last week, we told you all about why we love to make dehydrator dog treats.


We left one reason out. Totally bonehead move on the Mama’s part because it’s one of the best reasons!Dehydrator treats are so easy & low maintenance.


It is almost impossible to burn treats in a counter top dehydrator. No seriously, if it was possible, the Mama would have done it this week. She has chicken-brain and she is running around like a chicken with it’s head cut off. Every time she starts something, she forgets what’s she’s doing and starts something else. Can someone get her an Adderall or something? I can’t take all this chaos!Good thing this week’s treats took almost no concentration and even less effort!


And as an added bonus, they only have two ingredients. 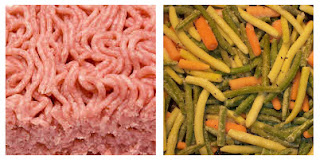 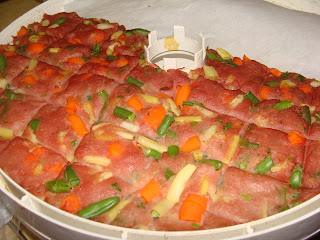 Tasty. Easy. Meaty. What more could you want in a treat?!


This is a blog hop!

Every week, we invite you to link up your Tastiest Post and Hop On to discover all sorts of new treats recipes, great giveaways and more!
To take part, follow your hosts, Kol’s Notes &  Sugar the Golden Retriever, grab the badge from our sidebar, get the InLinkz code  for your post, and add your link to this week’s hop!
All posts are the property of Kolchak’s Kitchen and Kolchak Puggle/Jodi Chick. Please ask before reposting content. All reposts must link back to our site. Thank you!
Click here to cancel reply.

These look yummy. Two questions, though...1) When you say they need to be flipped, is that @ 3 hrs, or after 6? 2) Should these be refrigerated? Thank you very much for your post. I have been looking for just such a treat recipe.

I flipped mine at about the three hour mark. If they are fully dehydrated so that there is no moisture remaining in the middle and they are crunchy, then they can be stored in an airtight container on the counter. If they are still flexible and moist, then I would store them in an airtight container (ie, not a baggie) in the fridge. Good luck! I would love to know how yours turn out :)