When you have a dog with sound reactivity, apartment living can be tough. We’re sharing a few simple strategies that help make sure my reactive dog and my neighbours can live in peace and harmony.

Felix is a lot of things.

Sweet. Snuggly. Fluffy and darling. He has eyes that could melt the iciest heart. He’s can get even the most unenthusiastic humans admitting that dogs are great – when they’re like Fe. He’s pumpkinhead. He can also be clever, cunning, bold and unabashedly willing to take whatever measures necessary to obtain what he wants. While the casual observer might decide that Kolchak is the Alpha power in our house, there are those of us that know the truth. Sweet Felix has a dark, manipulative side and he rules this house with an iron paw. If you have a chewy and he wants it, he takes it, unapologetically. If I’m up working late and he wants to go to bed, he demands it. He’s power hungry that one. He’s a Slytherin.

You have no idea how hard it was for me to come to terms with this. I wanted him to a Gryffindor. What’s worse is that after careful consideration, I think Kolchak and Lu might be Slytherin as well. The Crabbe and Goyle to Felix’s Malfoy, if you will.

This is my reality. I’m a Gryffindor stuck living living in Slytherin house. 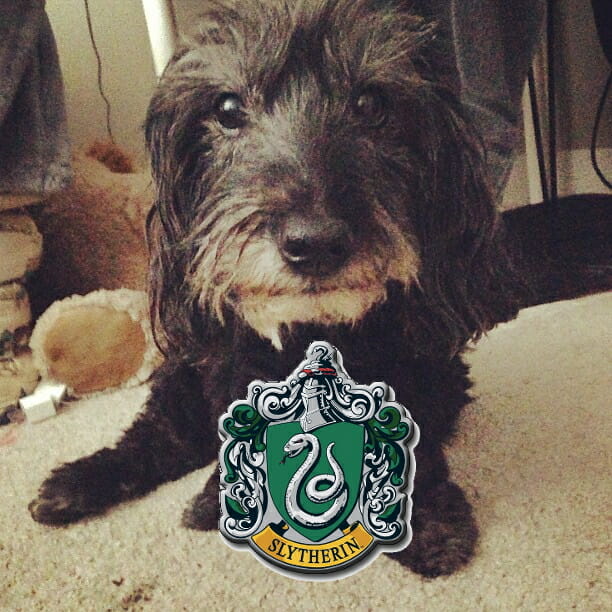 Slytherin (aka House of Bullies)

Like most bullies, Felix has a lot of anxieties.

This boy. *sigh* This boy is going to be the death of me. He has separation anxiety, restraint reactivity, beleives strongly in stranger danger, dislikes on leash greetings, and most concerning for me right now, sound reactivity.

That’s right, strange sounds rile Felix up, which is a real problem when you live in an apartment. There are sounds everywhere up in here, yo! People in the hallways with jingly keys, people talking in our visitor parking which is outside our window, the dog in the apartment around the corner and the gate on our underground parking. There are so many sounds. SO MANY!

I knew that if I wanted to make apartment living work, I was going to have to address Felix’s sound reactivity and FAST. Felix is not particularly food motivated. To be honest, he can take it or leave it, so treating him every time we heard a noise wasn’t an effective strategy. He thrives on attention, but it’s hard to reinforce sounds = snuggles when he’s already flying for the location of the sound full force is nigh to impossible. I knew I was going to have to distract him from the sounds.

How Stephen Fry saved my sanity.

Our quick solution has been to muffle the sounds. It took some doing to decide how to muffle them. After all, I can’t really sound proof my apartment. (Wouldn’t THAT be nice?!) Music was too jarring (plus, it gets on Kolchak’s nerves). I find “white noise” annoying. We finally settled on Audiobooks. After several tries that were a swing and a miss (Holy woof! Don’t get the Anne of Green Gables e books. The voices are ALL wrong and it will keep you up fretting over it…or maybe that’s just me.) We knew we had found the right choice when we settle on the Harry Potter books. Not many people realize it, but the UK version of the books is read by the amazing Stephen Fry, with a voice smooth like velvet. Strong enough to command Felix’s attention, but soothing enough that we can all fall asleep listening to it. The Harry Potter books are the perfect choice. Since I’ve read them multiple times, I don’t get too wrapped up in the story to sleep, but I find them interesting enough to listen to while I’m doing chores. The ever changing tone and voices (Oh yeah, Stephen Fry does the voices and it’s amazeballs) mean that Felix isn’t as reactive to the sounds and voices outside the apartment, in fact, sometimes, I don’t even think he notices them!

In a very short time, Stephen Fry has come to represent calm and quiet at Casa de Kolchak. We put it on anytime we’re feeling a bit stressed. We’ll listen to Snape lecture Harry while I make dinner or the boys will hear Hermione talk about SPEW while I hop in the shower. We’ll listen to a quidditch match while I get ready for work and attend defense against the dark arts while I do laundry.

My dog is a Potterhead.

Felix knows that Potter time is quiet time and I think he’s come to treasure it. You know that tiny break between chapters when you listen to an audibook? It’s not long, no longer than a few seconds, but impatient Felix is dying to get on with the story. As soon as the iPhone falls quiet, he paws at the screen waiting for Stephen Fry to start reading again. I was honestly going to get him a Hogwarts scarf, but the idea of seeing my boy in green and gold makes me feel heartsick. What’s next? Will I find out he’s a parseltongue? That he kills his stuffies to facilitate the making of his own horcruxes? It’s enough to make a Mama’s blood run cold.

Despite my concerns, we’re still listening to the Happy Potter books. It’s not the traditional solution for sound reactivity, but it works for us. I just wish my dogs were Gryffindors… or Ravenclaws… or Hufflepuffs. Anything but Slytherin.

Have you ever used an unconventional solution to a behavioral issue? What house do you think your dog would be sorted into?

How to Stop Dogs Barking Outside - Kol's Notes

[…] issues. We’ve talked about how we addressed Fe’s leash anxiety, how we dealt with his noise anxiety in the house and how we overcame his bad habit of barking at the door. Despite the fact that he is […]

[…] Felix is a bit sound reactive, so every little click of the shutter, mechanical whir while the autofocus kicked in or, oh holy woof, that flash would set him off and make him anxious. Once he was nervous and pacing, it was impossible to get a good shot. Turning off the sounds allows me to take photographs without all the distracting noises. We also find it highly beneficial, when we can, to play something that soothes Felix, like the Harry Potter audiobooks. […]

How to Minimize Dog Noise in an Apartment | Kol's NotesKol's Notes

[…] or restrict access to barking hot spots. We’ve told you guys how Felix is a wee bit sound reactive (and by a wee bit, I mean he is utterly convinced that keys in the hallway means Michael Myers is […]

[...] part of life at Casa de Kolchak. We’ve talked about how Felix has some reactivity issues, and we’ve shared some of the ways we’re combating them. Baby gates are an integral part of my behaviour management strategy. Once something has set Felix [...]

According to Pottermore.com I'm a Hufflepuff. I wonder if they will have a questionnaire for dogs? I have a feeling Beamer the Standard Schnauzer is a Gryffindor because he is too brave for his own good.