It’s time to get our trainin’ on!

Every year, we look forward to Train Your Dog Month, not because we wait all year to work on training, but because Pamela and Honey at Something Wagging host their Train Your Dog Month Challenge. This year will be even better because Alfie of Alfie’s Blog and Kristine and Shiva (and the cat?) of Rescued Insanity are joining in as co-hosts.

The real challenge? Deciding what we would tackle this month.

Are you implying that I need training, Mama?

I had planned to order Crate Games to work with both Kolchak and Felix on their comfort level in a crate, but you know, it’s me and I kind of forgot and then I panicked. So I went to the book store to get it, but it’s the book store you guys, so I got distracted and I came home with like three zombie books, a copy of the Hyperbole and a Half book and a Starbucks latte, but no dog training book. I’m awesome that way. Turns out my local store doesn’t stock it anyways, so that was a total bust.

Good thing my dogs have no end to the training issues we could tackle, so there were plenty of other options. I considered and rejected scores of ideas, finally settling on an issue that while it isn’t a huge problem, it is a wretched inconvenience and everyone at Casa de Kolchak dreads it.

I’m talking about trimming their nails.

Ugh. Is there anything worse? I know it has to get done and I know all the reasons you need to keep your dog’s short. Leaving your dog’s nails too long can result in discomfort, broken nails which can lead to infection and overtime, even lead to skeletal damage. That’s scary stuff…but let’s face it, pinning a puggle down to get his nails done is pretty scary too 😉

It’s about a million times better since we abandoned the guillotine style clippers and switched to a Dremel. Both my dogs have black nails which means I can’t see where the quicks are. That rattles me, since if you cut too far, you’ll clip the quick, hurt your dog and the blood will be EVERYWHERE. The dremel has lessened my anxiety, since it give me a bit more control. Still, Kol sees that thing and start evasive maneuvers. I’d like to end that. Getting your nails done should be fun. Who doesn’t love a nice manicure?! 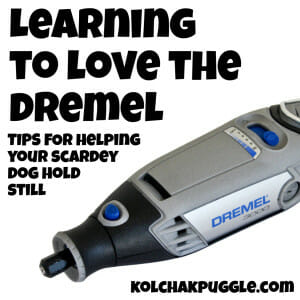 What am I missing?

Is there anything I could be doing better? Do you have any hot tips to get this nail business under control??

[...] started January with some pie in the sky goals about teaching Kolchak to love the dremel. The weekly grind has long been something I dread. A moment that, though necessary, drives a wedge [...]

My sapiens use this on me! I use to be mighty anxious with it...but now I know it's just my time for a mani-pedi

I love that you're going to work on nail trims! It's one of the things I find most of us dog owners (and dogs) hate, but it's gotta be done, so why not work to make it at least *acceptable* to your dogs. Not many will actually LOVE nail trim time, but it'd be so much easier for them (and us!) if they at least accepted it.

I've done (and am re-doing) a video that helps introduce the dogs to the dremel tool. I find the dremel so much easier and love that it is much more forgiving than the nail clippers. It's really hard to quick a dog with the dremel!

I started with this (just getting the dog used to me handling his feet): http://www.youtube.com/watch?v=dqMTZpYbrpg&feature=share

And then graduated to this (actual use of the dremel):

Hope it helps! :) and keep up the good work!

Check out this video by Susan Garrett (the Crate Games author!) on playing the "nail trimming game".....some good ideas in this short clip!

We have a similar issue and use similar tactics. But we've managed to make it so that Desmond can see the clippers and the Dremel and not run away. He isn't happy, but he just kind of submits.

We pretty much need both of us to accomplish this task, which is a hinderance for sure, but we use the Lickety Stik to get it done. And we never ever ever let Desmond see the Lickety Stik unless he has first seen--and sniffed--the clippers and/or Dremel. THEN we take out the Stik and he gets all happy.

From there, Joey does the nails while I hold the Stik for Des. I only let him lick it when Joey is actively clipping/sanding, and I take it away when Joey is repositioning or if Desmond is getting fussy.

All in all, it does the trick. It's worth the gas we have to smell after.