Ever since Felix’s achey breaky ACL issue back in the summer, the boy has started taking a lot of stuff.

First there was the pain killers, then the supplements to help him heal and stayed healed, the natural anti-inflammatories, the green lipped mussel, and the list goes on and on and on. That boy has his own pharmacy and health shop masquerading as my kitchen cupboard. We’re doing everything that we can, including the best nutritional support, to ensure his ACL stayed healed and there is no reinjury to that knee or an new injury to the other one.

There’s a bit of a problem though.

(I mean, other than the fact that he’s spending the equivalent of my vacation fund at the naturopathy shop because that is a problem. A big one. Can dogs get jobs? Is anyone hiring for something Felix is qualified for? He’s good at snuggling and eating and playing with toys. What job what that be? Does it pay well??) 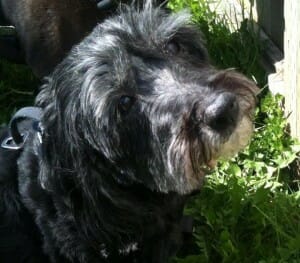 She’s trying to knock me off, I know it.

The real problem is that the boy hates taking his medicine. Hates it like poison. In fact, he acts like I am trying to give him actual poison. Right, Felix. I’m spending an amount the exceeds the GDP of some nations on your health but it’s all an elaborate plan to poison you (and land myself in the poor house.) However did you figure it out?

Clearly, this is not the case, but no amount of explanations can convince Felix. All pills, capsules or liquids must be spat out. Immediately. He has mad spitting skills to. No matter what you hide that pill in, he can extract the pill, eat what you hid it in and gob the pill back on the floor before you’ve even had time to blink. It’s his special skill.

Further complicating matters is Kolchak the Garbage can. No sooner has Felix slurped that pill back onto the kitchen floor, than Kolchak has slurped it back up. **baaaaaaaahhhhhhhhh* These dogs are trying to kill me.

That was before I became a dog med ninja.

With so many things to get inside him every day, we could not go on like that. I would have lost my mind, my temper and a ton of money wasting pills. I knew it was time to step up my game, keep that darn Felix on his toes and make med time a million times easier.

One little phrase changed everything. Say it with me:

“Can this be crushed?”

I had never really thought of it before, but then I remembered how we used to trick my GG into taking her pills by crushing them up and hiding them in apple sauce, yogurt and pudding. It was like magic, so I asked the vet if that might work for Felix. Turns out that most of Felix’s meds can be crushed (or the capsules can be broken open) which is like a gift from the heavens. It’s impossible to spit the pill out if it’s been ground in a bazillion little pieces. Even Felix can’t do it. Plus, turning his meds to a powder has opened up a whole new world of ways to conceal them. Even traditional pilling hiders, like peanut butter and cheese seem to work better with crushed pills.

The fussiest of dogs can be medicated with crushed pills, even if they won’t eat the laced treats. One of my friends with tiny humans turned me on to the idea of using a baby syringe. I use this trick to give Felix one of his liquid meds. I mix his dose with a little scoop of canned food and a bit of water, then it just gets squirted in his mouth. Voila! Just like that.

While crushed pills and a dosing syringe have given me the tools to make meds easier, Felix is still a smart as woof little whippersnapper. The real key to our success is practice. I’ve started slipping him his “pill” treats more often – except most of them time, they have no pill in them. I try to give 2/3 of his treats without meds, so that the one time I slip something in there, he’s not expecting it. I’m an evil genius, I know.

How do you give your dog their meds or supplements?

Cheese needs to stop being told it is safe for dogs. It is not it can cause pancreatitis in dogs. It happened to my dog because a friend told to to use cheese for my dog when she needs hee pills. I used it and my dog ended up with pancreatitis.

Hey Betty, I'm so sorry your dog got sick! Like with all ingredients, it's always best to check with your vet to ensure your pills can be crushed and before introducing a new food like cheese. Some dogs are more susceptible to reactions than others and factors like the rest of their diet and their weight can affect how much or how little cheese is safe. It also depends on the type of cheese you use. I wish there was a "one size fits all" solution that could safely be used for all dogs but there isn't. That said your vet should always be able to tell you if something is safe for your particular dog.

I loves the pill pockets too! Thou, sometimes Ruby knows that there's a pill in there, and if she's not eating at all, I have to go to the last resort which is to slide it down her throat with my finger and follow with freeze dried chicken (her absolute FAVorite). Luckily, she lets me do this, so there is usually little trouble in the end.

Roxy is the worst. I tried grinding pill up and hiding them. She refused to eat whatever I put the meds in. We had limited success with "potted meat" -- that salty, nasty stuff you get for 33 cents a can. Then I discovered Pill Pockets by Greenies. OMG they're awesome! After 5 years of fighting with her, Roxy now takes her pills with no problem. I strongly suggest you try the chicken flavor first. The Duck and pea smells so bad I gag (the dogs, however, love it).

I had to stop putting Silas's meds in his dinner, crushed or otherwise, because they apparently leave a bad taste. Since he's so picky anyway, this meant he just . . . wouldn't eat. Fortunately he's not a spitter, as long as the food tastes okay. Once I learned to put the bitter pills into a *dry* treat he does fine.

Clever! Sephi was a little pill too (pun intended), when it came to taking her meds.