When you have a fearful dog, making sure they have a refuge or a “safe place” to go to when they’re feeling stressed is an absolute must.

For Felix, that place has always been a small plastic crate with the door off. It’s long been the place he heads to when he’s overwhelmed, when Kolchak is driving him crazy, when I am driving him crazy and when he wants to have a nap. Part of making him feel secure in stressful situations in ensuring his crate is in an accessible location, close enough to the action that he still knows what is going on (and so that it doesn’t aggravate his separation anxiety), but removed enough that he isn’t right in the thick of it. Generally, his crate is tucked into a corner of the living room. That’s where it needs to be and I hate it. 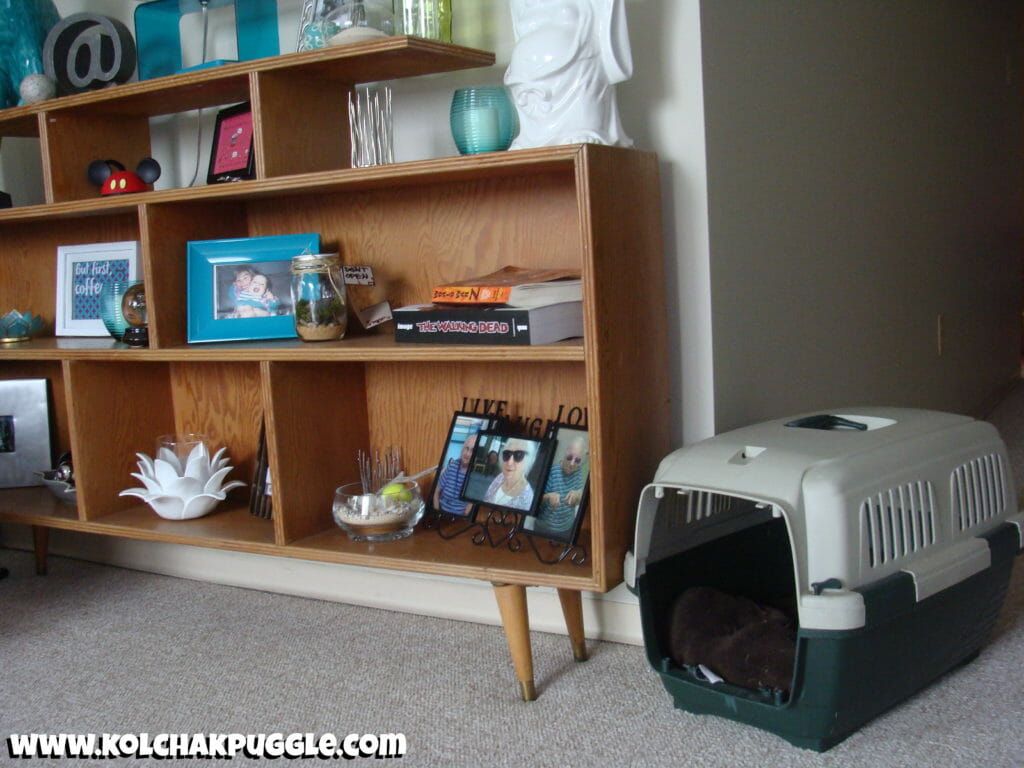 This crate is not doing anything for my living room decor.

It’s an ugly colour.  It’s cheap plastic. It looks totally out of place. We tried a wire crate, but Felix didn’t care for it. It was too open and airy. Part of what Felix loves about his crate is the “den” aspect. He likes his crates small, compact and dark. Despite the fact that it doesn’t nothing for the look of my home, I respect his wishes. I long ago resigned myself to having a lovely living room with a really ugly crate in it.

Lucky for me, Felix is an evil genius.

For months, I’ve been searching for the perfect end table. After our move last fall, I still haven’t fully furnished the new place. I’m fussy and I refuse to buy anything that isn’t perfect. Last weekend though, you guys, I FOUND IT. From across the Target (say it with me, in your best snooty accent please: “Tar-jae”. We have class, yo.) I spotted this super gorgeous metal basket weave table and I swear, I could hear an angel chorus sing. Obviously, the stars were all aligned because when I ran over (possibly shoving people in my excitement) I found that it was on sale for less than $25. It was like the Holy Grail of shopping finds.

I brought it home and laid it on it’s side while I scrubbed the price sticker off it and a funny thing happened. 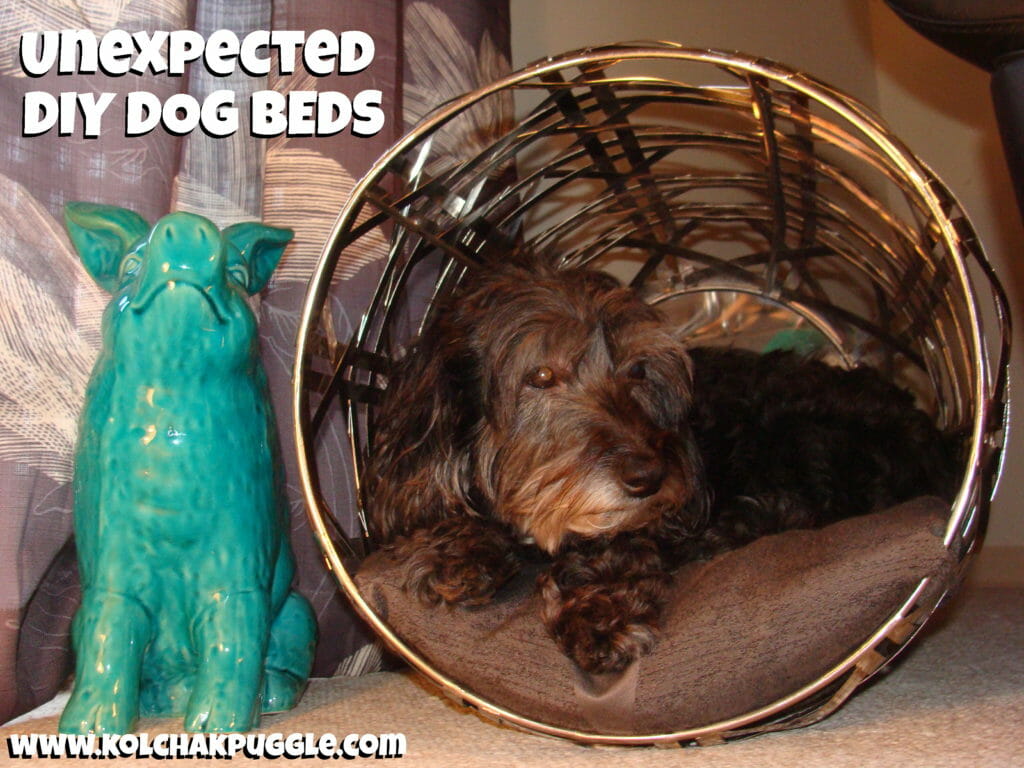 No seriously! He stole it! He’s a rotten little sneak thief! He crawled inside, turned around twice and laid down. He stayed there for three hours. I tried coaxing him out with treats, but he’d go right back in after. I tried luring him out and then flipping it right side up, but then he’d sit there, pawing at it and with every swipe, I’d have a heart attack that he was going to scratch it.

As I watched how much he wanted this thing, I came to thinking… it kind of looked good down on it’s side like that. Certainly better than the cheap plastic crate did.

I decided to let Felix keep it.

I put his crate pad in the bottom. I tucked it in beside the couch and I wished him a happy nap time.

Small dog owners are actually really lucky. We can skip the pricey designer dog beds and DIY our own solution with totally unexpected containers. Anything could be a unexpected dog bed that works with your decor. Imagine it: dog dens made from a wicker laundry basket, an end table, an outdoor planter or even a a hearth rack. Big dog owners have a tougher time, but non-conventional beds can be found. I’ve always really admired Mr. B’s rockin’ teepee.

If your goal is to have a dog friendly home that doesn’t look like it’s gone to the dogs, some times you have to think outside the box.

Do you have anything in your house that isn’t meant for dogs, but works for you?

We’d love to hear about your creative solutions.

Felix was just trying to help you out with a solution to the dog bed decorating dilemma. :)

Hahaha! That's too funny that he stole it, but what a perfect solution! What a stylish den he has now. Sorry he stole your end table though. ;)

Thanks Marquie. While I am still more than a little bitter over the loss of such a pretty end table, I'm also really happy to have that disgusting crate in another room (it's now living under the craft table).

What a cute idea! My dogs are too big for such a thing. I have an unsightly crate in the kitchen. Maya likes it there because she can still get some sun through the sliding glass door.

Felix has very good taste when it come to his own personal getting away space.

Felix has very good taste when it comes to most things. He's an expensive boy!

ooh, I love it

Me too and I have a giggle everytime I think of how Felix just took what he wanted.