Kol’s Note: This post is sponsored by Dognition. While we were givne the service free of charge in exchange for sharing our opinions, it is our guarantee to you that will only share products and services that we stand behind and can give our 100% honest opinion of.

When I discovered Dognition, I immediately knew that I wanted to do the tests with my dogs.

I am always so ridiculously curious about this kind of thing. While I’ve learned a ton about dogs in general over the last few years and I would like to think I’m more knowledgable than the average bear about canine behaviour, but let’s face you guys: I have no idea what I’m doing. 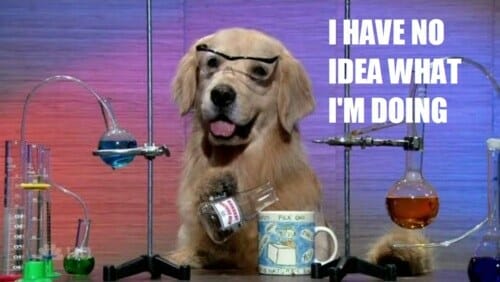 Have you heard of it? Dognition is a series of science-based games that you play with your dog and keep track of their responses and choices. Based on how your dog reacts to and completes the games, you get a report filled with expert analysis to help you gain a clearer understanding of how your dog thinks. This isn’t an IQ test. At the end, you’re not going to know how smart your dog is (or isn’t, as the case may be), but you are going to have a much better understanding of how your dog thinks and what makes them smart in their own way. 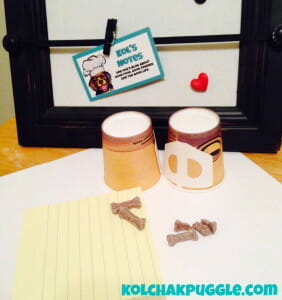 Two cups, Post It Notes, some paper and a woof-load of treats is all you need to understand your dog better using Dognition.

I like to think Kolchak and I are pretty tight, so I wasn’t expecting a whole lot of surprises from the Dognition report.

Still, I expected to have a whole lot of fun playing the games and I figured that at the very least, it would be an affirmation that I did know my dog as well as I thought I did. I was really pleasantly surprised. True to form, Kolchak did respond to most of the games exactly as I thought he would. (That boy is so predictable!) What I didn’t anticipate is just how much insight those reactions could give me into his personality and our relationship. Seriously you guys, I had NO IDEA. This report is kind of rocking my world and totally changing how I approach training and problem solving with my wily little puggle.

The games test five specific areas: empathy, communication, cunning, memory and reasoning. After completing the tests, your dog is assigned a profile that explains their personality and shares insight about how they think. There are nine different Dognition profiles that your dog might fit into and the profiles are as different as the dogs that embody them. For example, Bella from Bring Up Bella is an Expert, Dexter from Fidose of Reality is a Renaissance Dog and Jack from SlimDoggy is a ProtoDog.

My Kolchak is a Socialite

Here’s what the Dognition report had to say about Socialites.

It’s hard work making everything look so easy. In a culture obsessed with academic achievement, sometimes it is easy to overlook the fact that gracefully interacting and communicating with others requires talent. In Kolchak’s case, he takes this talent to a whole new level – it is definitely his genius.

Well, you guys, um…duh. It’s no secret that Koly has always been able to read me like a book and anyone who follows the Kol’s Notes Instagram feed knows that he is an excellent communicator. (Those faces!) He definitely has the skills to read a room and read the situation to make solid choices based on what the humans in the room are subconsciously telling him. For this reason, he seems to have an sixth sense for choosing which humans will feed him from the table, who will let him get away with shenanigans and who he needs to mind his Ps and Qs with. He knows I’m getting up to get a snack before I’ve even moved. He can tell when I’m sleeping and when I’m “sleeping”. I wasn’t terribly surprised that he tested as a quite socially adept. He is super smart when it comes to figuring his humans out.

He’s an all or nothing kind of dog and his personality is kind of black and white. 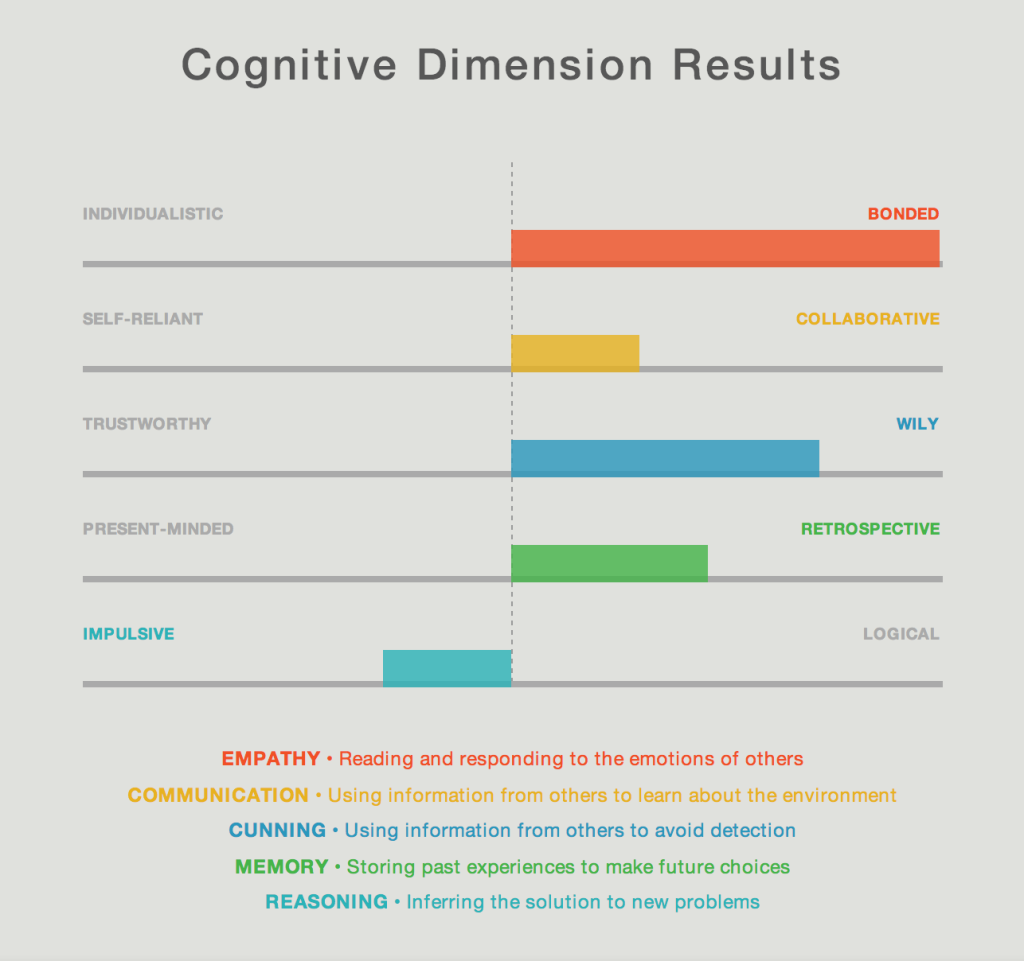 The results can skew wither way. You can get a dog that is impulsive or logical – or even a mix of the two. There are no grey areas with Kolchak. He is solidly one way or another. I had to laugh when I saw Dognition assessed him as completely wily and not even a little trustworthy. In light of our recent “steak thieving incident”, I’m going to have to say I 110% agree with this. He’s a wily little puggle and only a fool would trust him.

Beyond the giggles I get from referring to Koly as a wily little weasel, there is some important learning to be gleaned from the Dognition expert’s notes, particularly when it comes to the bond between Kolchak and I.  See that red bar across the top? It indicates how bonded Kolchak is. The answer is pretty. darn. bonded. I always knew that Kolchak was my buddy, but the depth of the bond kind of smacked me in the face and it became the under-current for what I learned through the Dognition tests.

Over and over, the test results remind me that not only does Kolchak like me an awful lot, he also relies on me and trusts me.

One particular game really hit home for me. You show your dog a treat and hide it under a cup, then you point to the opposite cup and tell your dog to take the treat. Kolchak switched back and forth between going to the cup he knew the treat was under and the cup I was telling him the treat was under.

When he saw you hide the treat under one cup but point to the other cup, he wanted to use the information you were giving him, but he also knew what he saw. Rather than choose one strategy, he switched back and forth between the two, which shows impressive flexibility.

The Dognition test see this as a mark of Kol’s flexibility, but I see something more. Kolchak wants to trust my direction even when he knows better. What does this say about our relationship? What social cues am I giving Kol and how does this affect him? I saw this in action a few weeks ago. We were out for a walk and a dog popped out from around a corner. Kolchak isn’t typically dog reactive (though Felix is), but when I saw this dog, I tensed up and panicked a little. Kol went off, barking and growling.

Wow. Even though he wasn’t afraid of the other dog, he took his cue from me and reacted. Clearly, our bond can be a blessing and curse.

That wasn’t the only thing in our Dognition report that gave me cause for reflection. Understanding that Kolchak is impulse driven has taught me better ways to set him up for success. Telling him my expectations for behaviour before he needs to know is much more sucessful than me trying to direct him in the moment. For example, a pre-emptive “OFF” while I’m cooking is much more effective than me shouting “OFF” as I drop something. Telling him to “HEEL” and “CHILLAX” when we see a dog in the distabce is more effective than me directing him once we have met the dog. His tendency towards impulsiveness explains why most of his behaviour lapses happen when I am distracted and not actively engaged. When he looks to me for direction and doesn’t get it, he spazzes out and trust his (poor) impulses. 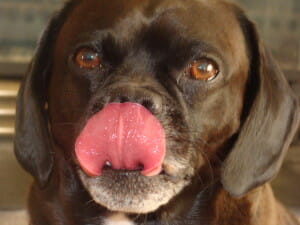 Who are you calling impulsive?! On an unrelated note, this is not steak juice on my chin.

Knowing that he prefers to take his cues from me, I’ve been trying to give him more chances to make his own independent choices. I’ve been letting him choose our walk route more. I’ve been encouraging more time spent playing independently. It’s not that I don’t love how solid our bond is, but I would like to see him embrace a bit of independence and have him be a little more confident in his own choices.

The Dognition report gave us a lot to think about and I highly recommend it.

Even with a dog you think you know like the back of your hand, there is so much insight and expertise to be gained. With a dog like Felix, who has always been a bit of an enigma, I can’t even imagine how helpful this report will be. We’re working our way through the tests with Felix now and I can’t wait to share the results with you. We’re also really excited to have a year long membership, so we can play a new game every month and continue working on better understand our bond.

If you’re interested in understand Kol’s diabolical little mind, you can read his full report. We have no secrets here! Does anything jump out at you as interesting?

Plus, next week, we’ll be talking a bit about the games themselves, the fun we had completing them and sharing some tips and tricks for people like me, who live alone. The games are designed to be played with two people and one dog. I am one person with two dogs, but I’m crafty like MacGuyver. Where there’s a will, there’s a way and I’m sharing how we did it.

Have you tried Dognition with your dog? Do you think you would be interested?

Discover Dognition on the web:

[…] this year, Kolchak and I completed the Dognition tests together. If you’re not familiar with Dognition, it’s a set of test (that feel like games) that […]

Very cool - the results are so interesting!

Thank you Anne-Grethe! Have you ever thought about doing a test like this with your dog?

I want this. I really, REALLY want this! But when I clicked on the "get it" on the website I got an error code. I am super bummed.

Darn! That sucks. What if you try this link: does it work then??

OOOH a socialite, eh? That is so cute. Did you have a fun time with the test? We sure did and I think we are going to invest in the monthly plan bc it was so awesome. TY for the shout out.