I woke up this morning in a most undognified fashion.

Daddy, imagining that he was still young and cool, tried to “beat the night”. His master plan was to stay up alllllllllll night, just to prove to Mama that he still could. Mama, being the reasonable, grown up in the relationship, had a nice dinner, took us for our walk, spent a few hours working on a project of her and then tucked herself into the bed with me and Felix just before midnight.
Daddy did everything he could think of to stay awake, but it simply was just not enough. He passed out on the couch, like the feeble old man that he is. Sometime around 6:15, he must have rolled over on the remote because all of the sudden there was some tartlette on the TeeVee screeching at the top of her voice about gettin’ dirrty. I flailed in my typical “Koly waking up” fashion (imagine a cross between a seizure and Elaine from Seinfeld dancing). Once I got over the initial shock of my rude awakening, I got to listening to the strumpet.
♪ ♫ Wanna get dirrty ♫ ♪

This girl is wearing a questionable outfit, but what a great idea. I like to get dirrty!

Maaaaaaamaaaaaa, let’s get up and play in the garden! (That is what she meant right? It’s a whole song about wanting to garden? I just love music with a positive message!)

I love to garden. I have a green paw. Now, I bet you that my garden ain’t got nothin’ on Wyatt and Stanzie’s, but me and Mama try hard. Imagine us like The Little Engine That Could, except with a old broke-down engine and a couple of bum wheels.
The Little Engine that Could: 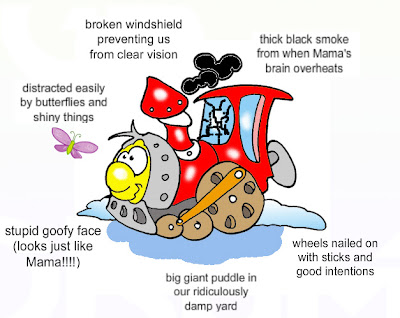 We always start with the best of intentions.

Plan the perfect layout. Prep the soil. Buy the seeds. Plant and water and weed ALL THE THINGS! My garden is going to be a masterpiece! People are going to walk by and ask if we have a gardener! My magic garden is going to grow enough veggies to feed EVERYONE I KNOW until the END OF TIME! And then, at some point (usually the weeding point) it all falls apart and the Hyperbole & a Half-style guilt spiral begins.
But it’s SPRING! A whole new garden season is upon us! ! We are gonna plant ALL THE THINGS AND GROW THE PERFECT GARDEN!!!!! *Royalty style fanfare and horn music*  WE CAN DO IT!! I WANNA GET DIRRTY!

We have a few classics that we manage to make turn out every year despite ourselves.

Our strawberry plantation is several years old and thriving, we can grow beans to beat the band – and often, or peas turn out pretty darn great. But we can’t fill a 200 square foot garden with just beans, peas and strawberries. BOL, though maaaaybe, if we focused on the three things we do well, we might just avoid the big giant garden mess?! We’d have an awful lot of each though. We could give it away like door prizes when people come to visit!
“Thanks for coming over. Congratulations! You have won 5 lbs. of green beans.”
What do you think?! Maybe not? FINE! We’ll plant more than that.

So tell us, what is your favourite veggie? Do you grow something fabulous in your garden? What should I grow?

[...] a lot to be said for apartment living. There’s no giant yard to mow. No ‘garden of good intentions and poor execution‘ to wrangle. No maintenance. Little upkeep. I could get used to this!  We don’t love [...]

[...] had just moved into our house and Mama had delusions of grandeur. For a few years, her garden of good intentions and poor execution was one of her proudest accomplishments. Then one year, under the gardeners cloth, in the dead of [...]

Getting dirty is good. I does it every day. Staying up all night...not so good!

The "dad is old" label cracked me up. This sounds suspiciously like a challenge that might be undertaken here by Matt. **face palm**I'll be right over for my 5 lbs of green beanies :)

Whoa whoa whoa, let's not get ahead of ourselves! We cant keep a HOUSEPLANT alive. No no no no no. We can grow an outside garden, 'cause let's face it - Mother Nature does half the work - the watering, the pollenating etc. All we have to do is keep the weeds at bay...and frankly we really phone that one in. I mean, no one weeded wild plants and they seem to do just fine - right?!