This post is a part 2 of 2 of our posts for the Be the Change for Animals Blog the Change Event.
To learn more about BtC4A or to Join us on today’s blog hop as we ask Petland USA to STOP SELLING PUPPIES, go to http://btc4animals.com

Behind the doggy in the window.


This morning, we told you about Petland (and other stores that sell pets) are supporting the puppy mill industry by selling their dogs to the public. We asked you to join the fight and sign the Change.org petition asking Petland to stop selling puppies. This afternoon, we thought we would take a look at what happens behind that cute dog in the window. Those dogs that you can buy in a pet shop or from a site online or even through an ad in the paper, aren’t the product of a responsible breeder or a happy family. Behind the window is a thriving business that puts profits before puppies.


Imagine that you are surfing the Internet and you find this ad:
(Kol’s Note: All spelling errors are from the original post.)

TURN KEY BUSINESS FOR SALE
I am selling all my dogs because my husband broke his neck and has had to retire. looking after him is a full time job and i feel i dont have the time needed to care for the dogs anymore. This is a great opporunity for anyone that is interested.

If you are anything like me, you felt sick to your stomach reading that.

Animal lovers all over the Canada and the US jumped on the ad, calling the owner with some “not so nice” messages and notifying the SSPCA.


An initial visit from the SSPCA found the condition of the mill to be filthy and one dead puppy was discovered, however the SSPCA said that the dogs had shelter, food, water and were not in distress. The operation was given one week to clean up it’s act.

Upon learning there was a puppy mill practically in their backyard, Lend A Paw knew they had to help.


Lend A Paw Animal Rescue in Battleford, SK first contacted the mill owner and the SSPCA offering to take the dogs into their rescue and give them a new start. Talks went well and it was looking promising that some or all of the dogs could be rescued. Then, despite having Lend A Paw and several other rescue ready to help step in, the SSPCA elected not to seize the dogs, instead giving them time to sell off the animals. It seems they figured that since these people were getting out of the business, that was a good enough solution. Except that in the meantime, the dogs were being bought by other mills and backyard breeders.

Lend a Paw had to move fast.

Pretending to be an new breeding operation just getting into the business, they were able to negotiate the sale of 13 dogs for a total of $1600. All but one of the pregnant females and one litter of the puppies had been sold.

No Dog Left Behind


As the dogs were loaded into their vans, one by one, Lend A Paw came to realize that the sellers had no idea what breeds the dogs really were or how old they were. There was no information about their vet care, vaccinations, deworming. No records of when the dogs had been bred last or how many litters they have had. No bloodline information for any of them. The two volunteers who went to pick up the dogs asked how many were left. There were 7 white dogs huddled together in a pen, looking so pitiful, so terrified that they just knew they could not leave them behind. For some unknown reason, both had thought to bring some “just in case” money with them that morning and the sale of the 7 white pups along with the last dog left at the mill, a yorkie was quickly negotiated for an additional $900.

Not in Distress, eh?

All 23 of the dogs rescued had fleas, lice, and worms. Every single one had ear infections and all needed dentals. One dog, estimated to be only three years old needed to have nineteen teeth pulled. It seriously makes me question the SSPCA’s definition of “distress”. I would be seriously distressed if I was infested with parasites, had painful infections and my teeth were rotting away.

Six of the rescued dogs headed to the Sundance Canine Rescue Society in Edmonton, AB and the other 17 learned a new way of life with Lend A Paw. The Battleford Community really stepped up, helping this young rescue with donations of much needed supplies and cash.

Since that fateful day, a lot has happened. 13 of the 17 dogs that stayed at Lend A Paw have been adopted into wonderful families. The only pregnant female rescued that day gave birth to a litter of super adorable, absolutely adoptable awesome puggles, lovingly nicknamed the Triumphant Ten, who we featured on our Finder Friday post this week. In a little over a week, these adorable puggles will be looking to find a new family of their very own, never knowing just how close they came to being casualties of the puppy mill system. The last four dogs to be adopted, Mama Pepsi, Muffin, Magic & Niki are looking for families of their very own as well.

We had no idea when we stumbled across these ten adorable puggles that it would lead us to this great rescue and this amazing story. What we didn’t tell you? A brand new rescue with practically no funds, Lend A Paw had only existed for only a week when founders Jeanette, Wendi, Sandra, Krisy, Glennda & Connie discovered this ad, pooled together their own money and decided to save as many of these dogs as they could. Not content to wring their hands and wish that these dogs could be saved from the mill, the ladies of Lend A Paw did something. Something amazing. They are an inspiration to me and to animal lovers everywhere. Next time you see a dog in distress or an ad in the paper that doesn’t quite add up, we hope you’ll remember the ladies of Lend A Paw and like they did, do what you can to help.

Here is another ad from the same mill posted before Lend A Paw stepped in and save the dogs. (Click on the image to embiggen.) Lend A Paw’s hard work means no puppies have to live in these conditions again. If only every dog were so lucky! 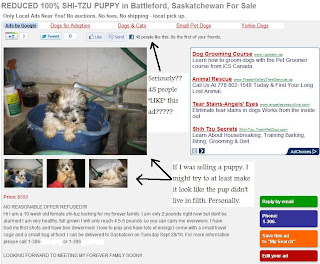 Do you want to support Lend A Paw?


This rescue welcomes the donation of funds and supplies to help offset the astronomical vetting bills for these rescues, as well as funds the help them continue their work. Donations can be mailed to: Lend A Paw Animal Rescue, PO Box 1839, Battleford, SK S0M E0E or sent via PayPal to [email protected]

Want to help put puppy mills out of business? Help us by asking Petland, the largest Puppy Mill supporter in the US to STOP SELLING PUPPIES. Check out our post Our Love is NOT for Sale to find out how.