Have you ever received a gift that was both a blessing and a curse?

Recently, the nice folks at TheGreenPetShop gifted Felix one of their Cool Pet Pads. Have you ever seen these things? They’re a thin, blue pad with some sort of  goo in the middle that gets cold when your dog lays on it. (Confession: I have no idea how it works. There’s probably some crazy technical explanation, however I suspect sorcery.) 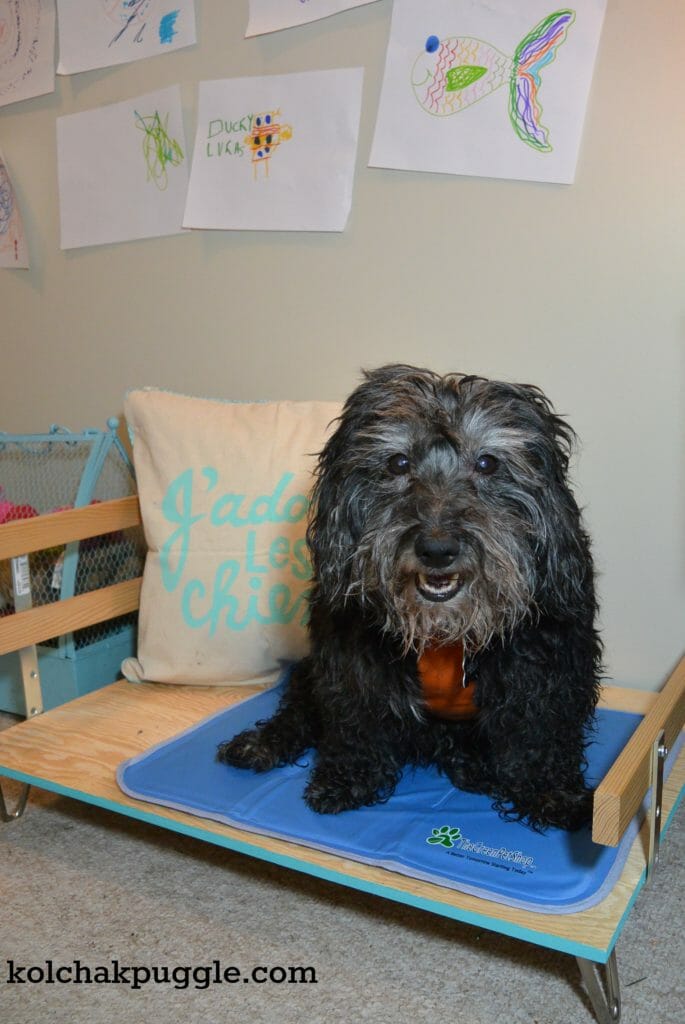 Felix is a notoriously warm boy. He’s that dog that is constantly seeking out the tile, porcelain or glass surface in any room to lay on it. One of my biggest disappointments when we moved into our apartment is that we had no tile for the poor boy to lay on. For a while, I looked online at cooling pet beds, but ultimately, I never ordered one. To be completely honest, I was skeptical about them and how they worked. I could never find them in our local stores and I knew if I ordered one online and HATED it, I would regret my purchase.

Still, I knew that in theory, a cooling pet bed was a really good idea for Fe.

You guys might remember that a couple summers ago, Felix tore his ACL…and then his other ACL. We opted against surgery and instead, treated his injury with conservative management, physical therapy and a woofload of TLC. A cooling mat was strongly recommended by our orthopaedic specialist for dogs with recovered ACL tears, arthritis and other inflammatory based injuries. The cold helps manage the inflammation and pain that can come when dogs are having a flare up. Developing arthritis down the road is on the the risks of conservative management, so I was thrilled when TheGreenPetShop offered us one of their a gel-based cooling pads for dogs to try.

Felix loves his Cool Pet Pad, but it took me a while to realize just how much.

At first, I placed the pad on his bed frame in the living room. He laid on it a little, but not a lot. He’s a creature of company and his favourite spot is on the couch, just barely out of my reach. (He’s a bit of a jerk or I’m a bit of a nuisance always loving him and petting him, I don’t know. We’ve agreed to disagree.) I decided to move the bed to his favourite spot. He laid on it constantly, but I still wasn’t sure if he liked it. I mean, maybe he would lay on anything if I out it in his spot. He’s not exactly the princess and the pea. He once laid on deer antler for three hours.

It’s no secret that my dogs sleep in my bed. Over the last few years, I’ve shared our series of “Bedtime Fairytales” detailing the questionable joys of sleeping with pets. (Are everyone’s dogs vicious bed hogs or just mine?) Felix took bedtime torture to a new low this week though. Sleeping around here should come with danger pay.

A few nights ago, I was comfortably snuggled up in bed (or as comfortably as I can be with these two jerks in the bed). I rolled over and WHAM. It was like rolling over face first onto a bed of snow.

FELIX HAD BROUGHT HIS COOLING PET PAD TO BED. 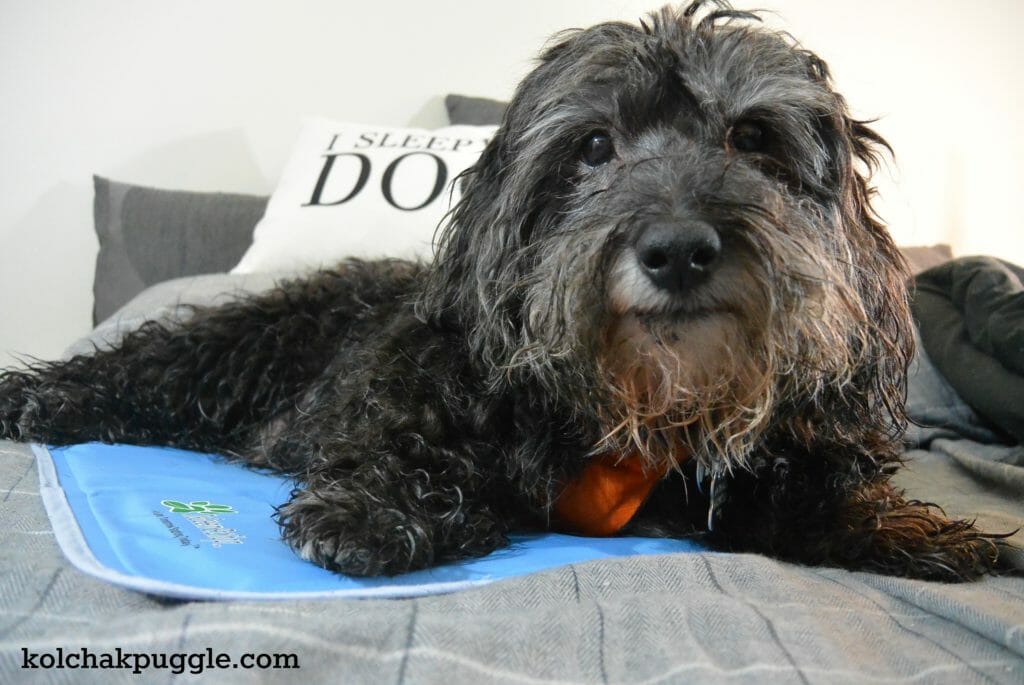 That boy is going to be the death of me. I was wearing a flimsy spaghetti strap tank top. Can you imagine the shock of rolling my bare arms onto that chilly dog bed? UGH. I was wide awake, I tell you what. Still, as surprised and annoyed as I was, I had my answer. Fe really did love the Cooling Pet Pad and, having tried it myself, albeit somewhat unwillingly, I can definitely attest to the fact that it works. In fact, come Summer, I can see there being a bit of a competition to see who gets a spot on the cooling bed. I should probably just go ahead and order a few more now.

Do you have a hot dog? Have you ever tried a cooling bed for them?

Oh my goodness your story is hilarious! You definitely got your answer since the cool blanket was dragged into bed with you. BOL Shasta loved his cooling blanket too.

Oh, I definitely need one of these for Sheba. She is always hot and mostly sleeps on the tile floors. Our new house won't have as much tile though. I just hope she doesn't want to bring it to our bed like Felix did! :)

What a great product!! My pups are the opposite, Ziva burrows under the blankets completely! She loves to be cozy. :-)