Mama has always been a bit of a whiney baby when it comes to the Casa de Kolchak sleeping arrangements.

You would think, what with the recent changes here that she might, just might, finally be happy with her sleeping space, wouldn’t you?

But no, not my Mama, she’s still griping! 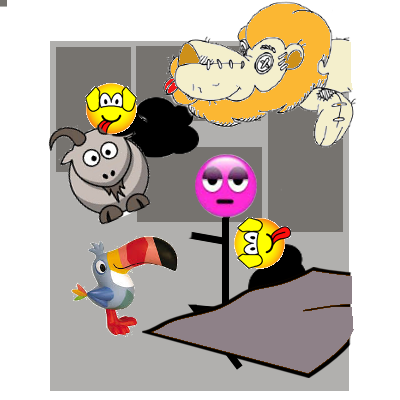 To be fair, the bed is more crowded than ever.

Why so much stuff you ask? Well, the first few nights in the new apartment, Felix was restless. Restless as heck. Mama brought Giant Stuffed Lion to bed to calm him down. It kind of worked, but we had to do more. (We’ll tell you all about it another time. Oh boy, do we ever have to do more to get Felix to sleep!) Still, giant lion had a permanent place in the bed and soon, Felix had dragged other toys in as well. He also demand two pillows or he’ll steal Mama’s. I need a pillow, though I may or may not even use it. Mama chooses to have a pillow take up space. She doesn’t have to have one. It’s up to her. She picked that pillow and then she gripes that there are two many pillows!

Mamas! Can’t live with ’em, but if you didn’t then who would take you for a walk?

[…] If you’re not familiar with our ongoing Bedtime Fairytale, you might want to check out Part I, Part II, Part III and Part IV.  […]

Let Sleeping Dogs Lie: How to Keep Dog Smell Out of Your Bed | Kol's NotesKol's Notes

[...] these dogs hog the bed. I’ve managed to banish a few toys from the bed after the last Bedtime Fairytale, but I genuinely don’t understand how a 20 lb. dog and a 25 lb. dog can take up that much [...]

SIlas has taken to sleeping on top of my feet at night. It's miserable. If I can pry my feet out from under him, then he's sleeping in the place where my legs are supposed to go. I guess I'll just be thankful that he doesn't fill the bed with toys. He carries up his own blanket and we keep a small dog bed at the foot of the bed, but that's it.

Your Mama should feel lucky that you let her sleep in your and Fe's bed. She's an ungreat :)

I tried going pillowless, but that did not work out, so I switched to a smaller pillow. More at dispute in our bedroom is where the princess sleeps. She likes the bottom of the bed and ONLY the bottom of the bed. She will tolerate a different spot, but only for so long, then she gets up and barks at Sampson to move. It does make me laugh, but not at 3 am.

I could never go pillowless. I'm going to try Delilah's trick, LOL! Tonight when Kol starts hogging, I'll woof at him and see what happens!