Once Upon a Time, the Felix believed that the camera would steal his soul.

Does anyone else remember the year that our Christmas Card shoot was a total disaster? This is just one, of many, times that I tried to create a nice photo memory and failed. My iPhoto library is a testament to how many crappy photos I have taken of this dog. Thanks a heap, Felix.

Do you know why our blog is called ‘Kol’s Notes’, even though it was inspired by sweet Felix?

He was the WORST dog to get a picture of. He wouldn’t sit still. He wouldn’t look at the camera. All attempts at a successful photo shoot were thwarted by Felix’s own refusal to co-operate. I tried begging, pleading and bribing him to work with me, but as it turns out, none of those things are successful dog training strategies. If I couldn’t get a half decent photo of him, I knew he couldn’t be the spokesdog for our blog.

Lately, though, I’ve been noticing that Felix is much more relaxed in front of the camera. 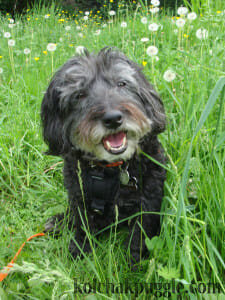 I hadn’t given too much thought to why, until Pamela from Something Wagging asked me if I had any tips to help her adorable golden, Honey, respond better to the camera. You know, I am clearly no expert at training and I am sure not an expert at photographing dogs, but I am an expert on Felix and how we’re working through his issues.

Felix is a camera shy dog, not because he is actually afraid the camera will steal his soul, but because, generally speaking, he is a nervous guy. Luckily, we’ve found some ways to work around his camera shy ways. 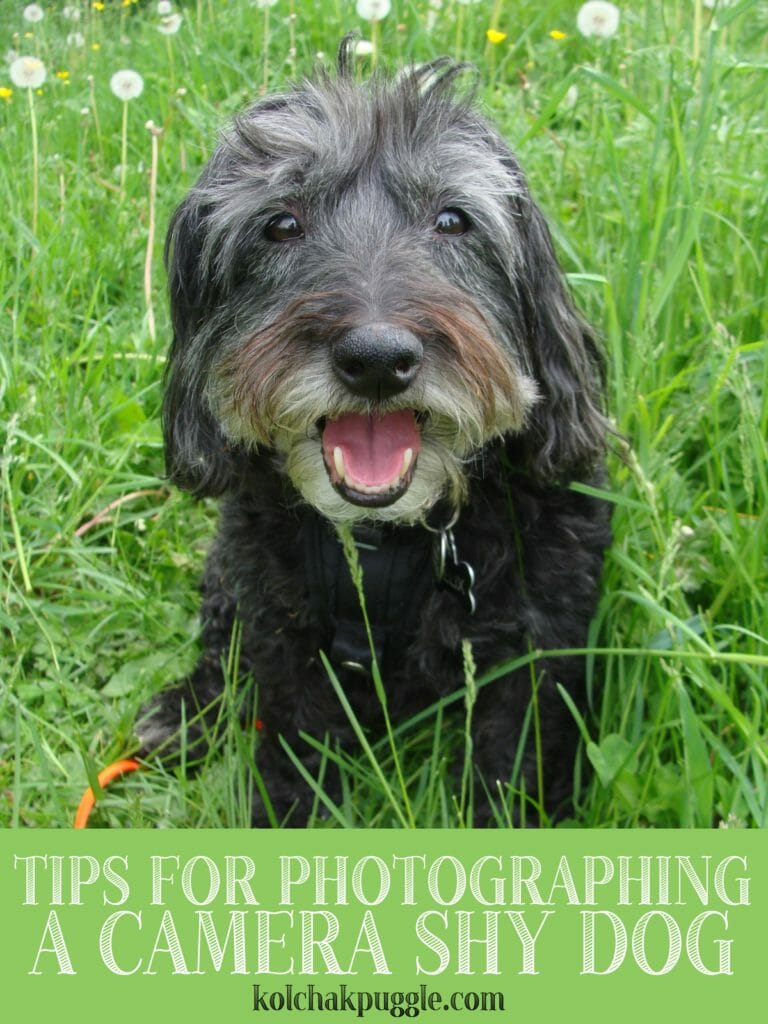 Since anxiety is at the core of Felix’s behaviour, working on activities that boost his confidence have been hugely helpful. We’ve been using basic obedience and simple tricks, along with Sophia Yin’s exercises for reactive dogs. The more we do to make him more confident in every day life, the less camera shy he has become. The obedience training has the added benefit that I can ask him to sit or stay and he will. These days, he will even stare intensely into the lens…usually when he is asking to bring a toy on our walks.

When it comes to the camera, more is more, practice makes perfect and all those cliches. 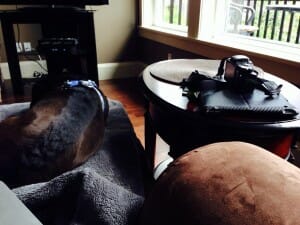 Camera, on the side table, always at the ready.

Give your dog ample opportunities to see and interact with the camera. Ours is almost always out. I turn it on often. Sometimes, I will take pictures of things in the room or use the flash to photograph the floor, walls, knick knacks etc. just to get Felix used to it (and to reward him when he doesn’t react.) I take pictures of Felix every single day. I delete 99% of them, but as a result, he’s getting really comfortable in front of the lens.

Turn off the sounds. 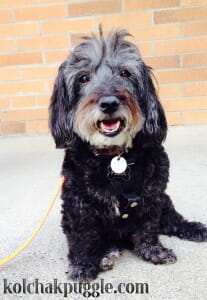 Felix is a bit sound reactive, so every little click of the shutter, mechanical whir while the autofocus kicked in or, oh holy woof, that flash would set him off and make him anxious. Once he was nervous and pacing, it was impossible to get a good shot. Turning off the sounds allows me to take photographs without all the distracting noises. We also find it highly beneficial, when we can, to play something that soothes Felix, like the Harry Potter audiobooks.

Sit on the ground 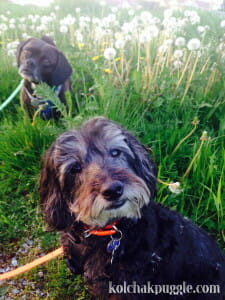 Something about getting down on Felix’s level seems to level the playing field. I get way better shots sitting or laying on the ground than I do when I loom over him, like a giant. (Ok, so everyone who has met me is laughing hysterically at the thought of me looming like a giant over anyone, but for realsies. Even I am a giant compared to a small dog.)

Shoot from the hip. 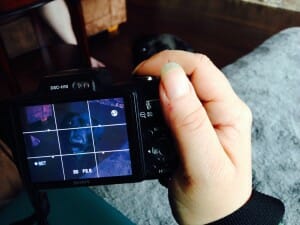 As soon as I put the camera up to my eye, Felix is lost. Any attention I had is gone and you can kiss my chances of getting a good shot good bye. It has taken some practice, but I have learned to use the preview screen on my digital camera, so that I can set up a picture without putting it un front of my face. I find that by keeping eye contact with him and holding the camera just below my face, I can get an infinitely better photo of him looking right at the camera. I look like a total dork when we’re out on a walk and I suddenly sit down with my camera, but who the woof cares what those people think anyways?! 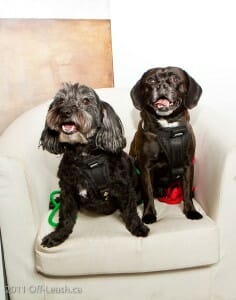 I don’t think I can ever thank Angie from Off Leash Photography here in Vancouver enough for teaching me the BEST photo trick ever. I don’t even think she realized what a gift she had given me. She took the pictures above at a charity event hosted by Love on a Leash a few years ago and they are my favourite, ever. It was the first time I realized that maybe Felix could take a nice photo after all. So how did she do it? She got the boys in place on that chair, looked at them and yowled like a cat.  It was brilliant and I can honestly say it has changed my picture taking forever. (Picture, if you will, me, in the middle of an abandoned lot overgrown with dandelions, yowling like  cat as passersby consider calling the mental health authority.  I have no shame; I will use this trick anywhere.)

My photos of Felix are never going to win awards, they aren’t ground breaking and they aren’t brilliantly composed.

They’re snap shots, nice snap shots, but snap shots all the same. However, they’re clear, you can see his face and I do think they capture his sweet personality pretty woofing well.

When you consider how far we’ve come and how many people have no good pictures of their camera shy dog, I’m grateful.

Felix may never been a dog model like Bunny (check out her tips for photographing a camera shy dog) and I may never capture shots like the gorgeous black and whites at NewfandHound, but we’ve captured a whole lot of fabulous memories and to me, that is all that matters.

What is your best tip for photographing a camera shy dog?

Love this article! And thanks for the shout out.

One of the best things I can say is to avoid using the flash if you can. Natural light is much better, or use some fill lights. I got some from a company called Neewer and they are small, portable and can even mount on your camera. But the flash can really make it tough for a lot of dogs to look at the camera. Our second Greyhound was such a big goofball, but in pictures he always looked so GQ because of his aversion to looking at the camera. Getting some small, portable lights makes a huge difference.

YES! We bought a set of studio lights last year and it was a game changer for our indoor photos.My set up will never rival your collection of lovely backdrops and props, but it definitely makes it easier to get nice photos of these guys!

Excellent tips, thanks for sharing. Sam manages to look away just as the shutter is going off (sigh) but we'll keep practicing.

Ah, that is so frustrating! Definitely keep working at it!

I know you gave me a free pass to mark everything in my feed as read but I sorted through hundreds of posts looking for this one that I didn't get to read before.

Excellent tips. Especially taking pictures every day. I don't enjoy photography so I don't bring the camera out often enough. But I'll try to do a little every day.

I have tried making unusual noises but they've never had any effect on Honey. Guess I'm paying the price for all that puppy socialization we did.

Love the photos of Felix and the tips. Definitely going to have to try the cat-yowling thing with Rita. She's not totally camera shy, but she often looks away, and no amount of kissy-kissy noises or weird whistles will get her to look at me... but I think a cat yowl will work!

I change it up ALL the time Jackie. You never know what weird sound is going to come out of my mouth. LOL!